Chaplains of Color: An Overview

In Between Places: the Everyday Work of Chaplaincy

In Between Places: The Everyday Work of Chaplaincy and Spiritual Care 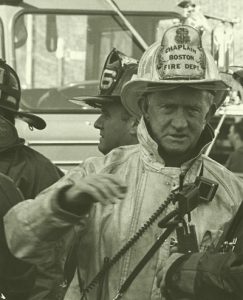 Before American Airlines Flight 11 crashed into the World Trade Towers on 9/11, the long-time Catholic chaplain at Logan International Airport in Boston had been notified and was preparing for an emergency. He helped set up the crisis center at the Hilton Hotel that morning, accompanied airport employees through emergency efforts in the coming days and months, and was central to memorial efforts in Boston and New York for several years. Chaplains were similarly on hand following the Boston Marathon bombing in 2013, caring for first responders at the scene and for the injured at area hospitals.

Boston, like cities and towns across the United States, is home to a great number of chaplains. Required in the military, federal prisons, and Veterans Administration Medical Centers, chaplains also work in two-thirds of hospitals, most hospices, many institutions of higher education, and a growing range of other settings. Barry C. Black, the sixty-second chaplain to the United States Senate, and Rev. Margaret G. Kibben, the seventeenth chaplain to the House of Representatives, regularly engage with national leaders through public prayer and private conversation. Chaplains have been present at national protests ranging from Standing Rock to the Occupy Movement to racial justice protests that took place across the country in 2020.

A national survey conducted in the United States in March of 2019 found that 21% of the American public had contact with a chaplain in the past two years, more than half in or through healthcare organizations. These numbers have likely increased since the start of the COVID-19 pandemic as chaplains were described in the early months as “Run[ning] Toward the Dying” in the New York Times, responding to “Shifted Spiritual Care” in U.S News and World Report, and “bridging the gap between patients and grieving families who can’t stay by their bedside during the coronavirus pandemic” on CNN. Chaplains facilitated calls (and too often goodbyes) between patients hospitalized with COVID-19 and family members not permitted to visit.

COVID-19 thrust chaplains—especially those in healthcare—into the national spotlight as they cared for patients, family members, and exhausted and traumatized medical staff fighting the pandemic in real time. That spotlight, like COVID-19, was new, but the work of chaplains was not. I step back from the spotlight in this book to ask who chaplains are, what they do across the United States, how that work is connected to the settings where they do it, and how they have responded to and helped to shape contemporary shifts in the American religious landscape.

I focus on Boston as a case study capturing, and historically contextualizing, who describes themselves as chaplains and how that has changed particularly since 1965. Though not a historian, I combed through the archives of major Boston institutions including the city government, police and fire department, hospitals, universities, rest and rehabilitation centers, the Catholic church, and several Protestant denominations to chart the work of chaplains historically. I also reviewed the Boston Globe and read articles about chaplains published every five years between 1945 and 2015. To describe the current landscape, I identified every institution and group in the city of Boston during the fall of 2016 and spring of 2017 that might have a chaplain. I met and interviewed over one hundred chaplains who work in greater Boston and include in the book the sixty-five who work in the city. I also shadowed chaplains whenever possible, going on board container ships in the port, walking through homeless shelters, and attending religious services at local prisons.

I begin this story aware that scholars have rarely included the work of chaplaincy and spiritual care when thinking about local and national religious ecologies in the United States. Historically on institutional edges, the chaplains I write about are a motley crew. Their predecessors were as well—a mix of congregational clergy, part-timers, and people particularly in the military and healthcare organizations for whom chaplaincy was their life’s work. Some sought out the work and others ended up there because they did not fit well in congregations or had histories that made them difficult to place in congregations. In recent years, some religious entrepreneurs, with and without formal religious training, have also taken up the term chaplain to describe their work. Members of religious minority groups and those in majority groups formally excluded from religious leadership have also adapted the role and use the formal institutional space it facilitates for professional (paid) religious work.

The work of chaplaincy varies significantly by setting. All chaplains seek to engage with people holistically and remind them of bigger picture questions and concerns, what one chaplain described as reminding people of their peripheral vision. Regardless of setting, all chaplains work around death and help individuals and institutions negotiate religious differences, including with people who are not religiously affiliated. The term chaplain, then, remains flexible with a largely Protestant history that is inconsistently used and easily adapted in the American religious marketplace characterized by free-exercise and limited regulation. Perhaps it is the organizational in-between-ness of chaplains, the ephemeral notion of presence, or the improvisation chaplains often do within and across settings then that led them to be largely off the radar of scholars.

The data and analyses highlighted in this book show how chaplains have been, and remain, an important part of institutional religious ecologies, both locally and nationally. I engage with scholarly literatures in sociology, religious studies, and organizational studies to contextualize these data. I encourage scholars, religious leaders, and educators to step back and look broadly enough that they can see chaplains and integrate their work into thinking about American religious life. Considering the work of chaplains and keeping it on the radar of scholars and religious leaders may be a source of continuing insights into the future of religious life in the United States.